“So how quickly can you get them working like us?” When this question was asked, I was standing in front of a group of twelve senior business leaders from five national cultures – India, China, Italy, the United States and Brazil. After a long awkward silence, I was thankful to realize I was not the only person in the room who was visibly insulted. Unfortunately, this approach is not uncommon. Managers and team members often look at cultural differences as obstacles to productivity and performance. Conflicting values and expectations for communication and behaviour become barriers that must be removed. It is believed the best solution to challenges faced by culturally diverse teams is to create one uniform style of behaviour that everyone must adhere to. What is even more interesting is that it is not always the dominate group that expects others to adapt to their working style preferences. I often observe members of global teams trying to imitate the behaviour of what they perceive to be the more correct style – while minimizing any differences that result from their unique or distinctive approaches.

While it is true that individuals working within diverse teams must at times modify their style in order to be effective – one must also be aware of the negative impact of putting too much importance on one style or approach. Each cultural orientation has its own unique value to contribute. Creating a homogenous group removes the opportunities for leveraging the inherent strengths that are present when people from different cultures come together to achieve a common goal.

The trick is achieving that delicate balance between making slight modifications to one’s working style during the initial stages of team formation AND maintaining one’s own unique style in order to maximise the value that can be derived from diverse perspectives. In order to understand how global teams can benefit from cultural diversity, one can use dimension frameworks that examine the source of these complex differences.

Cultural Dimensions
There are many approaches and frameworks one can use to explore cultural systems. For the purpose of conducting a more in-depth analysis of how multicultural teams can leverage conflicting values for better performance, I will use the life work of professor and interculturalist, Fons Trompenaars. He and his colleague Charles Hampden-Turner developed a model for analyzing national cultural differences based on seven dimensions. For this example we will look at one of those dimensions. 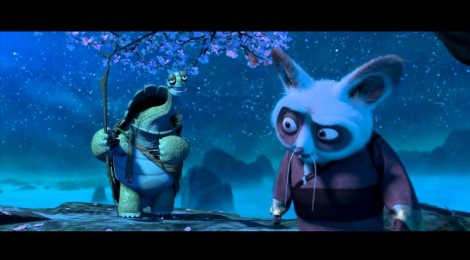 This dimension focuses on the way in which people view and interact with their environment or nature. In the animated film Kung Fu Panda, we see these two world views expressed through a conversation between Master Oogway and Master Shifu. Master Oogway says, “My old friend, the panda will never fulfil his destiny, nor you yours, until you let go of the illusion of control. Look at this tree. I cannot make it blossom when it suits me, nor make it bear fruit before it’s time.” For which Master Shifu insists, “But there are things we can control, like when the fruit falls and where to plant the seed. That is no illusion!” This pop-culture reference shows the conflict between these two attitudes towards nature.

Internal Control and the Proactive Approach
Individuals who have an internally controlled or mechanistic view of nature, like Master Shifu, believe that one can and should dominate the environment around them. Masters of their own universe, they often view themselves as the source of determining correct action. It is their right to create value by utilizing the environment as they see fit. Furthermore, they are fully responsible for the consequences or results of those actions.

One can find evidence for the source of this world view in the Bible. In Genesis 1:29 it says “God blessed them and said to them, ‘Be fruitful and increase in number; fill the earth and subdue it. Rule over the fish in the sea and the birds in the sky and over every living creature that moves on the ground.’” In later parts of the New Testament, there are countless references made to this scripture which further solidify the relationship between humans and nature. Mankind, is deemed by God to be a superior being with higher cognitive abilities. Nature, both the animals and the land, are at his disposal to be utilized for his benefit. Furthermore, the Bible’s emphasis on free will and independent action communicate the value put on individuals as responsible for their own circumstances. In modern times, we see this attitude expressed in common expressions like, “the early bird catches the worm.” In German, “Wenn der Reiter nichts taugt, ist das Pferd schuld” means “If the rider is no good, it’s the horse’s fault.” This German proverb is used sarcastically to criticize when someone wants to shift the blame to exterior factors and circumstances rather than taking personal responsibility.

Take this into a business context: A team with an attitude that expresses internal control, will put importance on highly detailed planning. Their approach to project work will be systematic, compartmentalized and mechanistic (equal to the sum of its parts). Actions will be linear and organized in a sequence. Tasks will be broken down into parts and assigned to individuals who will be expected to take complete responsibility. The entire objective of project scoping and planning is to reduce uncertainty and create rigid systems for ensuring the desired outcome is achieved. Compare and contrast this to the external world view.

External Control and the Responsive Approach
Individuals who have an externally controlled view of nature, like Master Oogway, believe that they are one force in nature, operating within a complex system of forces. An individual can exert power or control in certain situations but may also be at the mercy of other stronger forces of nature. This world view communicates a kind responsiveness to the environment, as opposed to a dominate approach. Results and outcomes are not the sole responsibility of an individual but the combination of a variety of factors and circumstances.

The Vedic Texts in Hinduism emphasize an interesting blend of fate and free will. The role of karma and right or wrong action made in past lives, impacts one’s current reality. However, one’s future or fate can be changed by right action in the present, setting into a motion a series of events that can lead to a different outcome. Furthermore, individuals are still responsible for the outcomes of their actions, question is, are these actions from past or present lives? Current circumstances, like the family one is born into or whether or not a strong monsoon brought about a good crop that year, is the result of one’s fate. 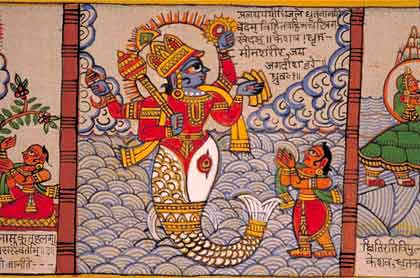 Author Bhayahari Dasa, provides a great example of a conversation recorded in the Matsya Purana. In it, Satyavrata Muni, a great king, inquires, “O Lord, which is superior: fate or one’s own exertion and effort? I have doubts on this; kindly resolve them.” In reply, Lord Matsya (an incarnation of Vishnu) explains that three elements—fate, effort, and time—conjointly affect the course of one’s life. He gives the example of a farmer, whose crop depends on three factors: planting, rain, and time. Planting represents effort, and rain represents fate. If the farmer plants but there’s no rain, he’ll have no crop. And if it rains but he hasn’t planted, he’ll have no crop. Both fate and effort are required, as is time. One can find countless examples of this world view in expressed in modern times. While channel surfing recently, I stopped on a Bollywood movie in which the famous Bollywood star Farhan Akhtar says to his friend, “Insaan ka kartavya hota hai koshish karna. Kamyabi, nakamyabi sab uske hath main hain” which in English means “It is your duty to try. Whether you succeed or not is in the hands of God.” Or take for example the simple expression “Insha Allah” or “God Willing” which is often spoken at the end of business discussions or agreements when working in the Middle East.

Take this into a business context: A team with an attitude that expresses external control, will emphasize connections between “actors” and complex forces within a project. Actions will be more cyclic and may overlap without a clear start and end. Tasks are more likely to be shared amongst a group where individuals feel comfortable sharing responsibility and depending on each other to achieve results. Scoping and planning are important stages in the project, but it is understood that requirements may change and one must be ready to adapt to any given situation. There is a willingness to make the most of any given situation regardless of whether it was in the original plan or not.

A quick look at these contrasting world views, puts into perspective how one can utilise differences to create agile and innovative global teams:

Internal Control Attitude: I am in control of my environment and whatever happens is the result of my own efforts

External Control Attitude: I am one force or “actor” amongst many others in my environment and whatever happens is the result of my actions and a combination of those forces

After investigating this one cultural dimension, it is clear that conflicting value systems create different attitudes and approaches to work. Take any global project as an example. Regardless of the nature of the work or industry or desired outcome, there will be a need for both a proactive and a responsive approach. With customers and clients that span the globe and a dynamic shift in power from traditionally developed nations to developing nations, multinationals must not only embrace cultural differences represented by diverse talent – but they must also find ways to tap into those inherent strengths.

As a member or manager of a global team, the first step is raising your level of awareness and appreciation for diverse styles of working. Use this knowledge and awareness to carefully construct trust and credibility amongst all team members. Continue by validating differences and being very purposeful during the forming and storming stages of team creation. Organize individuals according to the way they will thrive, delegate work keeping in mind the strengths and stressors and maintain an openness throughout the entire process. This atmosphere will become a breeding ground for exceptional results and innovative products and services. Not only is it good for business but also for valuing and preserving the cultural integrity of diverse peoples across the globe.